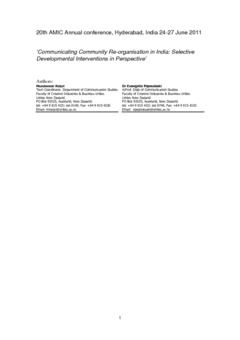 This paper presents a critical perspective on communication with communities within the development efforts at the grassroots level in the Indian context. It is part of an exploratory research undertaken by one of the authors (Naqvi, M) on Non-Governmental Development Organisations’ (NGDOs) communication with their target communities in central India. The authors present two models, selective interaction and new involvement, developed from the data collected from semi-structured interviews of different types of NGDOs in Central India. They discuss conflicting ideals at play in the objectives and approaches of the ‘key players’ interacting with the community, and how these objectives are communicated to the community. The ‘key players’ include the externally funded NGDOs, the State funded NGDOs, the Elected Panchayat (governing body), the Traditional Panchayat (body of elders), and, the Target (beneficiary) Community itself. Since development interventions of NGDOs within participatory approaches establish gram sabhas or similar village level organisations comprised of individuals or groups from within the community to gain cooperation into their projects, a certain re-organisation is an inevitable part of ground NGDO’s interaction with the target community. The new structures that emerge get modified and strengthened as the project moves on, so the social, economic, and political landscape changes significantly over the duration of intervention(s). The first model Selective Interaction maps major stated objectives which affect the key players’ interaction with the community. Conflicting approaches are identified such as political agenda driven activities of the elected Panchayat; Free market, corporate culture driven activities of the externally funded NGDOs; state funded NGDO’s activities driven by compliance/control/monitoring of Government Schemes; and culture driven activities of the traditional Panchayat. Some questions are asked within the context of this model including (1) whether the agents of change (key players) recognise the consequences of developmental interventions with highly selective objectives, which may or may not be mutually compatible (2) and if they are aware, it raises further questions in the area of preparedness for the challenges emerging from this non-integrated approach evident from data. Such questions bring into focus the way communication is managed around sharing this awareness (where it exists with the agents) with the target community, how much is shared and to what end. Finally, where no such communication exists, what might be the reasons for not sharing of this awareness with the community? The key players at the grassroots level are mapped with the range of other larger players who have a visible stake in development of the community. This second model was introduced in part as the new involvement model (Naqvi, 2004) as a modification of the ‘community agency’ model (proposed by Lyons et al 2001) and adjusted to the Indian context. This model attempts to look at the larger picture and identifies (1) the ongoing or eventual isolation of certain players (2) the structural constraints on key players acting through linguistic and non-linguistic means (3) Media interest at various levels of development stakeholders, and (4) information flows Considering some of the anecdotal accounts of research interviewees, the discussion finally reflects on whether developmental interventions within the participatory development paradigm genuinely seek the integration of the local community(ies) into the global economy, or that community development is a transitory objective –the longer term objective being seamless integration of local resources into the global economy.