An investigation into the transition from student to practising osteopath 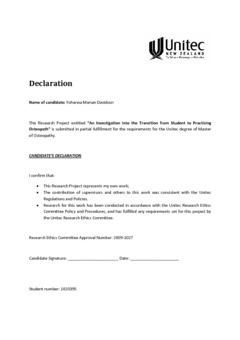 Davidson, Y. M. (2011). An investigation into the transition from student to practising osteopath. (Unpublished document submitted in partial fulfilment of the requirements for the degree of Master of Osteopathy). Unitec Institute of Technology, Auckland, New Zealand. Retrieved from https://hdl.handle.net/10652/1616

As osteopathy within New Zealand continues to gain recognition as an integral component of the mainstream healthcare system, it is important to understand the transition process which occurs as new graduates enter the profession. With this knowledge, it may be possible to facilitate the transition into the workforce from studying. The aims of this study were to determine the experiences of new graduates, identifying key themes that arose and possible strategies which could be implemented to ease the transitional period for future graduates. The method deemed most appropriate for this empirical research was that of a case study. In order to create triangulation in this research, both a questionnaire and interviews were used. Twenty new graduates responded to the questionnaire and seven also volunteered to be interviewed. All participants had studied osteopathy at Unitec and had been working in New Zealand for fewer than 18 months. The findings were similar to those in the literature. New graduates often had an unrealistic perception of practising life leading to ‘transition shock’. Stress, uncertainty, a lack of confidence, a feeling of isolation and both physical and mental exhaustion were common feelings. Participants found expectations placed on them, especially by patients but also from colleagues and even themselves, were difficult to cope with initially. Despite generally feeling prepared, there were a number of procedures which new graduates struggled with when first practising, such as referring patients to their GPs or for x-rays, ACC and other business-related aspects. There was also a common feeling of needing more time practising techniques and clinical reasoning as a student. With time and experience came a greater sense of preparedness and confidence in their ability. Self-care was important in helping participants cope with the difficulties they encountered initially. Mentoring and support were also identified by respondents as being very beneficial. This research has implications for education providers, the osteopathic profession and new graduates, involving educational curricula, professional support programmes and an increased awareness of the realities of practising osteopathy.