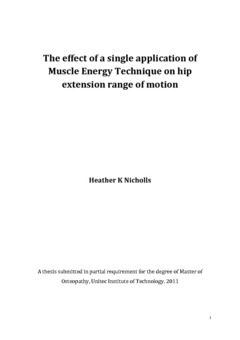 Nicholls, H. K. (2011). The effect of a single application of Muscle Energy Technique on hip extension range of motion. (Unpublished document submitted in partial fulfilment of the requirements for the degree of Master of Osteopathy). Unitec Institute of Technology, Auckland, New Zealand. Retrieved from https://hdl.handle.net/10652/1604