Detail as fragment: The incomplete, the possibility of connection and an excess of multiplicities 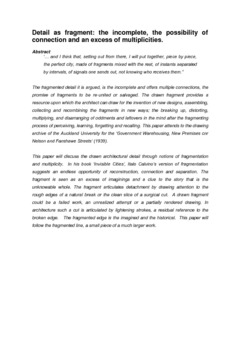 Hedges, S. (2010, June/July). Detail as fragment: The incomplete, the possibility of connection and an excess of multiplicities. Paper presented at Imagining..., the 27th Annual International Conference of the Society of Architectural Historians, Australia and New Zealand. Newcastle, Australia.

‘… and I think that, setting out from there, I will put together, piece by piece, the perfect city, made of fragments mixed with the rest, of instants separated by intervals, of signals one sends out, not knowing who receives them.’ The fragmented detail, it is argued, is the incomplete and offers multiple connections, the promise of fragments to be re-united or salvaged. The drawn fragment provides a resource upon which the architect can draw for the invention of new designs, assembling, collecting and recombining the fragments in new ways; the breaking up, distorting, multiplying, and disarranging of oddments and leftovers in the mind after the fragmenting process of perceiving, learning, forgetting and recalling. This paper attends to the drawing archive of the Auckland University for the ‘Government Warehousing, New Premises cnr Nelson and Fanshawe Streets’ (1939). This paper will discuss the drawn architectural detail through notions of fragmentation and multiplicity. In his book ‘Invisible Cities’, Italo Calvino’s version of fragmentation suggests an endless opportunity of reconstruction, connection and separation. The fragment is seen as an excess of imaginings and a clue to the story that is the unknowable whole. The fragment articulates detachment by drawing attention to the rough edges of a natural break or the clean slice of a surgical cut. A drawn fragment could be a failed work, an unrealized attempt or a partially rendered drawing. In architecture such a cut is articulated by lightening strokes, a residual reference to the broken edge. The fragmented edge is the imagined and the historical. This paper will follow the fragmented line, a small piece of a much larger work.