After the rot: Improving the durability of building envelopes in domestic housing, New Zealand 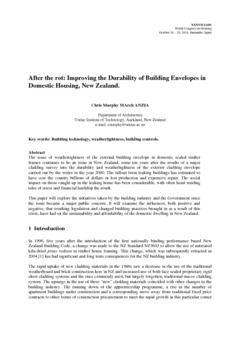 The issue of weathertightness of the external building envelope in domestic scaled timber frames continues to be an issue in New Zealand, some ten years after the results of a major cladding survey into the durability and weathertightness of the exterior cladding envelope carried out by the writer in the year 2000. The fallout from leaking buildings has estimated to have cost the country billions of dollars in lost production and expensive repair. The social impact on those caught up in the leaking home has been considerable, with often heart rending tales of stress and financial hardship the result. This paper will explore the initiatives taken by the building industry and the Government since the issue became a major public concern. It will examine the influences, both positive and negative, that resulting legislation and changed building practices brought in as a result of this crisis, have had on the sustainability and affordability of the domestic dwelling in New Zealand.