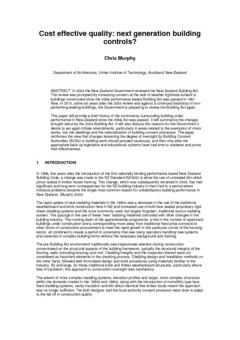 In 2004 the New Zealand Government reviewed the New Zealand Building Act. The review was prompted by increasing concern at the lack of weather tightness evident in buildings constructed since the initial performance based Building Act was passed in 1991. Now, in 2010, some six years after the 2004 review and against a continued backdrop of non-performing leaking buildings, the Government is preparing to review the Building Act again. This paper will provide a brief history of the controversy surrounding building under performance in New Zealand since the initial Act was passed. It will summarize the changes brought about by the 2004 Building Act. It will also discuss the reasons for the Government’s desire to yet again initiate amendments, particularly in areas related to the exemption of minor works, low risk dwellings and the rationalization of building consent processes. The paper reinforces the view that changes lessening the degree of oversight by Building Consent Authorities (BCAs) to building work should proceed cautiously, and then only after the appropriate back up legislative and educational systems have had time to coalesce and prove their effectiveness.