Showcasing green urbanism on waterfronts: A comparative study of Porto Alegre and Auckland 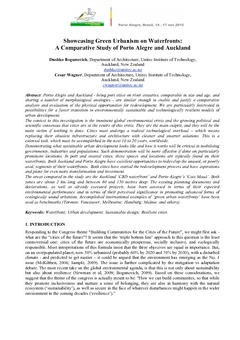 Porto Alegre and Auckland - being port cities on river estuaries, comparable in size and age, and sharing a number of morphological analogies - are similar enough to enable and justify a comparative analysis and evaluation of the physical opportunities for redevelopment. We are particularly interested in possibilities for a faster transition to environmentally sustainable and technologically resilient models of urban development. The context to this investigation is the imminent global environmental crisis and the growing political and scientific consensus that cities are at the centre of this crisis. They are the main culprit, and they will be the main victim if nothing is done. Cities must undergo a radical technological overhaul – which means replacing their obsolete infrastructure and architecture with cleaner and smarter solutions. This is a colossal task, which must be accomplished in the next 10 to 20 years, worldwide. Demonstrating what sustainable urban development looks like and how it works will be critical in mobilising governments, industries and populations. Such demonstration will be more effective if done on particularly prominent locations. In port and coastal cities, these spaces and locations are typically found on their waterfronts. Both Auckland and Porto Alegre have excellent opportunities to redevelop the unused, or poorly used, segments of their waterfronts. Both cities have started the redevelopment process and have aspirations and plans for even more transformation and investment. The areas compared in the study are the Auckland ‘CBD waterfront’ and Porto Alegre’s ‘Cais Mauá’. Both zones are about 2 km long and between 60 and 150 metres deep. The existing planning documents and declarations, as well as already executed projects, have been assessed in terms of their expected environmental performance and in terms of their perceived significance in promoting advanced forms of ecologically sound urbanism. Accomplished international examples of ‘green urban waterfronts’ have been used as benchmarks (Toronto; Vancouver; Melbourne; Hamburg; Malmo; and others).