The spatial syntax of Iraqi refugee housing in Syria 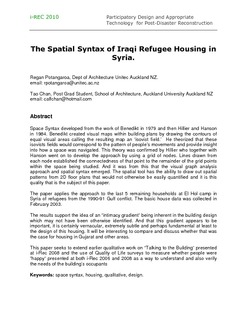 Space Syntax developed from the work of Benedikt in 1979 and then Hillier and Hanson in 1984. Benedikt created visual maps within building plans by drawing the contours of equal visual areas calling the resulting map an ‘isovist field.’ He theorized that these isovists fields would correspond to the pattern of people’s movements and provide insight into how a space was navigated. This theory was confirmed by Hillier who together with Hanson went on to develop the approach by using a grid of nodes. Lines drawn from each node established the connectedness of that point to the remainder of the grid points within the space being studied. And it was from this that the visual graph analysis approach and spatial syntax emerged. The spatial tool has the ability to draw out spatial patterns from 2D floor plans that would not otherwise be easily quantified and it is this quality that is the subject of this paper. The paper applies the approach to the last 5 remaining households at El Hol camp in Syria of refugees from the 1990-91 Gulf conflict. The basic house data was collected in February 2003. The results support the idea of an “intimacy gradient” being inherent in the building design which may not have been otherwise identified. And that this gradient appears to be important, it is certainly vernacular, extremely subtle and perhaps fundamental at least to the design of this housing. It will be interesting to compare and discuss whether that was the case for housing in Gujarat and other areas. This paper seeks to extend earlier qualitative work on “Talking to the Building” presented at i-Rec 2008 and the use of Quality of Life surveys to measure whether people were “happy” presented at both i-Rec 2006 and 2008 as a way to understand and also verify the needs of the building’s occupants.