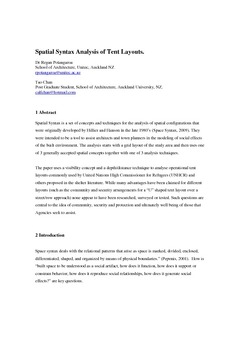 Spatial Syntax is a set of concepts and techniques for the analysis of spatial configurations that were originally developed by Hillier and Hanson in the late 1980’s (Space Syntax, 2009). They were intended to be a tool to assist architects and town planners in the modelling of social effects of the built environment. The analysis starts with a grid layout of the study area and then uses one of 3 generally accepted spatial concepts together with one of 3 analysis techniques. The paper uses a visibility concept and a depth/distance technique to analyse operational tent layouts commonly used by United Nations High Commissioner for Refugees (UNHCR) and others proposed in the shelter literature. While many advantages have been claimed for different layouts (such as the community and security arrangements for a “U” shaped tent layout over a street/row approach) none appear to have been researched, surveyed or tested. Such questions are central to the idea of community, security and protection and ultimately well being of those that Agencies seek to assist.