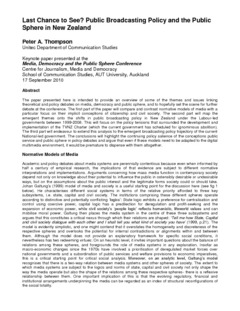 Thompson, P. (2010, September). Last chance to see? Public broadcasting policy and the public sphere in New Zealand. Paper presented at the Conference on Media, Democracy and the Public Sphere, Auckland.

The paper presented here is intended to provide an overview of some of the themes and issues linking theoretical and policy debates on media, democracy and public sphere, and to hopefully set the scene for further debate at the conference. The first part of the paper will compare and contrast normative models of media with a particular focus on their implicit conceptions of citizenship and civil society. The second part will map the emergent themes onto the shifts in public broadcasting policy in New Zealand under the Labour-led governments between 1999-2008. This will focus on the policy tensions that surrounded the development and implementation of the TVNZ Charter (which the current government has scheduled for ignominious abolition). The third part will endeavour to extend this analysis to the emergent broadcasting policy trajectory of the current National-led government. The conclusions will highlight the continuing policy salience of the conceptions public service and public sphere in policy debates and argue that even if these models need to be adapted to the digital multimedia environment, it would be premature to dispense with them altogether.