Attitudes and beliefs of New Zealand osteopaths towards chronic pain 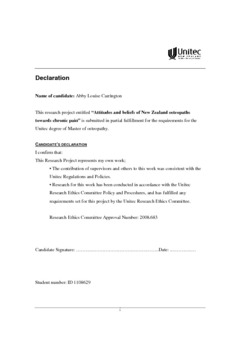 Carrington, A. L. (2009). Attitudes and beliefs of New Zealand osteopaths towards chronic pain. (Unpublished document submitted in partial fulfilment of the requirements for the degree of Master of Osteopathy). Unitec Institute of Technology, Auckland, New Zealand. Retrieved from https://hdl.handle.net/10652/1542

Background: The attitudes and beliefs of osteopathic practitioners and students towards chronic pain may potentially affect the outcome of treatment. These attitudes and beliefs are thought to be influenced by factors such as professional status, education, gender and clinical experience. There is currently little data about the attitudes and beliefs of osteopaths about chronic pain. Objective: The purpose of this study was to investigate the attitudes and beliefs of the New Zealand osteopathic population; establishing whether osteopaths agree with the notion that pain justifies disability and whether they prefer a biomechanical or behavioural orientation towards the treatment of chronic pain. Professional status, education, gender and clinical experience were assessed for their ability to adjust attitudes towards chronic pain. Methods: A survey study design was implemented with two surveys (HC-PAIRS and PABS_PT) administered using coded email message or mailed letter. There were 242 respondents for the HC-PAIRS survey, and 232 for the PABS_PT survey. HC-PAIRS mean total scores were compared with published data from Australia, Brazil and North America; and PABS_PT mean total dimensional scores were compared to published data from the Netherlands. Pearson’s correlation was performed between the HC-PAIRS and both dimensions of the PABS_PT. Results: There were very few substantial differences when comparing New Zealand osteopaths and osteopathy students. Students appeared to prefer a behavioural orientation for chronic pain more than practitioners, and those who reported prior pain medicine education less preferred the biomechanical orientation for chronic pain than those participants with no pain medicine education. Attitudes that surfaced included disagreement with the notion that pain justifies disability, the importance of exercise and movement, and the agreement that a patient’s view of their pain can have an affect on treatment outcomes. Additional attitudes imply osteopaths have an awareness of the mechanisms of chronic pain. Pearson’s correlation between HC-PAIRS and biomechanical and behavioural dimensions of the PABS_PT, revealed correlation co-efficients of 0.56 and -0.07 respectively. There were small differences between the mean total scores of NZ osteopaths and healthcare professionals from Australia, Brazil, North America and the Netherlands; however, the clinical relevance of these findings is not clear. Conclusion: There were very few substantial differences in the attitudes of the osteopathic population when comparing practitioner status, education, gender and clinical experience. Osteopaths’ attitudes highlighted the perceived importance of exercise, patient beliefs, and an awareness of the current theories of the pain mechanisms in the management of chronic pain. New Zealand osteopaths (including students) neither strongly agree nor strongly disagree with the perception of pain as a justification for disability; nor do they strongly prefer a biomechanical or behavioural orientation for the treatment of chronic pain.