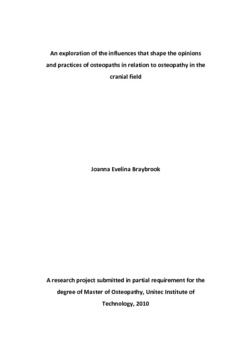 Braybrook, J. E. (2010). An exploration of the influences that shape the opinions and practices of osteopaths in relation to osteopathy in the cranial field. (Unpublished document submitted in partial fulfilment of the requirements for the degree of Master of Osteopathy). Unitec Institute of Technology, Auckland, New Zealand. Retrieved from https://hdl.handle.net/10652/1541

Despite its popularity osteopathy in the cranial field (OCF) is perhaps the most controversial modality within the osteopathic profession; yet little is known about how or why such differing opinions about OCF develop. This study explored the influences that shaped the opinions and practices of osteopaths in relation to OCF. The study employed a qualitative approach with an interpretive descriptive method. Convenience and purposive sampling strategies were used to recruit thirteen individuals who participated in data collection for the study. Data collection involved three semi-structured focus groups, whose members held either strong opinions against OCF, neither strong opinions for nor against OCF or strong opinions for OCF. Two individual interviews were also held with key informants; one key informant with strong opinions against OCF and one with strong opinions for OCF. After interpretive thematic analysis of the focus group and individual interview transcripts, themes were identified. The key shaping influences of the participants’ opinions of OCF and their decision whether or not to practice OCF were presented within three thematic groups: identified as ‘me’, ‘it’, and ‘they’. ‘Me’ included those influences that originated with the intrinsic needs or beliefs of the participants, ‘it’ referred to those influences that developed because of the participants’ perceptions of the OCF modality, and ‘they’ incorporated the influences shaped by ‘others’ and at times their actions. The discussion for this study was based on the largely absent theme of ‘us’. Although the participants from the three focus groups and two individual interviews had very different opinions about OCF, many of them used the same philosophy to support their opinions. In effect the participants were using the same philosophy to support very different viewpoints. This suggests that there is a lack of consensus about what osteopathy is, and this affects osteopaths’ opinions about OCF. The relationship between the past and present also had a significant impact on the participants’ opinions. The past had significant implications when it came to research and evidence based practice, spirituality and dogma.