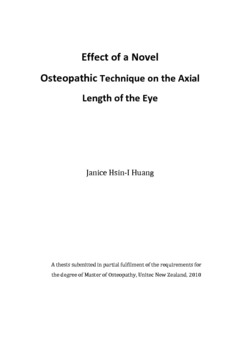 Huang, J. H.-I. (2010). Effect of a novel osteopathic technique on the axial length of the eye. (Unpublished document submitted in partial fulfilment of the requirements for the degree of Master of Osteopathy). Unitec Institute of Technology, Auckland, New Zealand. Retrieved from https://hdl.handle.net/10652/1540

Introduction: This thesis is divided into three sections: I) Literature review; II) Manuscript (in the format specified for submission to the International Journal of Osteopathic Medicine); and III) Appendices. Objective: To investigate the short term effect of a novel osteopathic technique on the axial length of the eye. Methods: A single-blinded pre-test post-test experimental design was adopted. Two experiments were conducted to investigate two types of intervention: i) muscle energy technique (MET) targeted at the medial and lateral recti; and ii) MET targeted at all six extraocular muscles. The axial length of the eye was objectively measured using partial coherence interferometry (IOLMaster, Carl Zeiss Meditec, Germany) operated by qualified optometrists. Phoria was measured with a Maddox wing to determine whether there was any change in extraocular muscle tension. Tests for stereo acuity and the near point of convergence were conducted to give indications of subjects‟ state of binocular vision. Two tailed paired t tests were undertaken to compare both mean axial length, and mean phoria, pre and post-intervention. The pre and post-intervention data for axial length were also compared for individual subjects. Subjects: Two groups of 10 adults (n=20) between the age of 18 and 35 with refractive error between -1 and -6 D were recruited from the general community. Volunteers with strabismus, active ocular disease, heart disease, or diabetes were excluded. Results: Analysis of group data showed insufficient statistical evidence to support either method of intervention in effecting a clinically important change in axial length. Analysis of data from individual subjects revealed two eyes (in two different subjects) out of 40 eyes that underwent a change of ≥ 0.093 mm (equivalent to 0.25 D). Statistical analysis of phoria failed to find sufficient evidence to validate the efficacy of the intervention in effecting changes in relative muscle tension in the extraocular muscles. Conclusion: MET targeted at the extraocular muscles was ineffective in altering the axial length of the eye. Further development work in application of the intervention techniques is necessary if further work is to be conducted in this area.