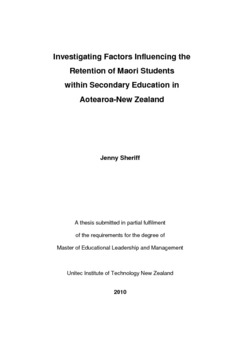 Sheriff, J. (2010). Investigating factors influencing the retention of Maori students within secondary education in Aotearoa-New Zealand. A thesis submitted in partial fulfilment of the requirements for the degree of Master of Educational Leadership and Management, Unitec Institute of Technology New Zealand.

Maori students in mainstream schooling in Aotearoa-New Zealand are significantly disadvantaged by inequitable education outcomes. Some blame the students themselves or their families for this situation, while others argue that other factors, such as low socio-economic status are to blame. This thesis argues that the perpetual poor outcomes of education for Maori are the direct result of misguided and ineffective government policies which have sought to assimilate and to control Maori students for many decades. Despite the promises of equality and protection of taonga (education being a taonga) contained within Te Tiriti o Waitangi, successive governments have failed to uphold those promises and education for Maori has had a devastating effect on their mana, their language and their economic status within mainstream society. Education has had the effect of relegating Maori to the status of servants in their own country by replicating the culture, language and customs of a Pakeha majority within schools and educational institutions while simultaneously marginalising Maori language, Maori knowledge and Maori cultural practices. The result for generations of Maori students has been disengagement from education and early exit from school. This study sought to examine the factors which influenced a group of thirteen Maori secondary school students to continue their secondary education into Year 13, the last year of secondary school. It was conducted in two Auckland secondary schools of differing deciles during 2010 and it focused on student voice by using semi-structured interviews as the primary means of gathering in-depth qualitative data to form its findings. The study sought to approach the research from a strengths-based perspective, in keeping with the intent of Ka Hikitia – Managing for Success (Ministry of Education, 2008b) to identify some factors which contributed towards the students remaining in school. The findings show that the students identified their whanau as having the strongest influence on them, followed by community and school influences such as teachers, sports coaches and the whanau of the local marae. The significance of this is that collaboration with whanau has the latent potential to positively impact on the educational experiences of Maori students, to improve their achievement and to increase their life chances in the future, if schools are willing to consult and collaborate.