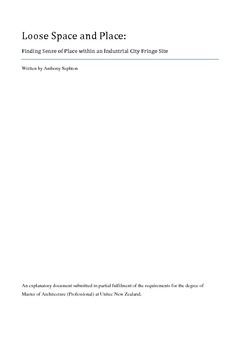 Sephton, A. (2011). Loose space and place: Finding sense of place within an industrial city fringe site. (Unpublished document submitted in partial fulfilment of the requirements for the degree of Master of Architecture (Professional)). Unitec Institute of Technology, Auckland, New Zealand. Retrieved from https://hdl.handle.net/10652/1538

The following section provides an introduction to the following explanatory document in support of a design scheme. An outline of the of the key concepts are defined and explained and context for the design process established. Problem: This paper argues that urban renewal within Auckland City leads to the loss of "place" a concept highlighted by Edward Relph in 1976 as the city pursues development strategies that result in homogeneity. Urban renewal is responsible for producing placeless environments in areas which hold significant value to communities and individuals. Urban change is constantly affecting our city. It is an ongoing process within the built environment meaning urban areas are never static; they are constantly changing systems of interconnected parts.1 As the city continues to change, the conservation of key areas becomes all the more important. These environments need to be conserved in the hope of retaining meaningful places within Auckland's urban landscape and reducing placeless development. Purpose: The project aims to identify tools that advance architectural design practices in relation to retaining a site’s existing “sense of place,” despite the redevelopment of an area, thereby reducing further “placeless” development in a unique area of the city. As this paper aims to provide an insight into possibilities of addressing placelessness due to the market-led process of physical urban renewal, an architectural scheme is proposed using Auckland City as a case in point. This scheme will act as a test to determine whether the intervention can in fact reduce the associated effects of urban renewal which lead to the spread of placelessness within an urban environment. Method: This project uses a standard scientific method to carry out research within the context of architecture. Research through literature, site analysis and design will provide the basis for a critical appraisal to be carried out on a final design scheme. Hypothesis: By broadening strategies associated with “conservation” to encompass existing social aspects of a site (the way in which the site is used by a community) the retention of a sites “sense of place” can be retained during the renewal of an existing urban environment thus reducing the spread of placelessness within our cities. Loose space involves the adaptability of a site for various human activities to occur. It is created when people recognise the potential in a space and use it for an activity they want to partake in. As loose space created sense of place within the chosen site, a hypothesis was also formulated in direct relation to the chosen site. It stated: By conserving loose space within this particular site, as well as physical features, the sense of place experienced within the site, can be retained therefore minimising the effects of placelessness. Results and conclusions: A review and search of literature suggests that large scale comprehensive “urban change” known as “urban renewal” has potential negative impact on a site's “sense of place”. A primary relative consequence of such renewal is “placelessness” and serves as the key focus of this project. Secondary issues also affect the site's sense of place, such as “beautification” and “gentrification”. These two issues prove to be troublesome aspects of urban renewal, and are therefore also addressed within this project. Furthermore, it is noted that within the site examined, one of the key aspects which allowed the creation of a “sense of place” was the “loose space” associated with the site. The idea of “loose space” becomes the a focal point in adversity to the problem of placelessness. The concept of conservation is also utilised and together these concepts guide decisions made during the design process leading to the production of the finalised design scheme. 1 Chris Couch, City of Change and Challenge : Urban Planning and Regeneration in Liverpool (Aldershot: Ashgate, 2003), p.6.