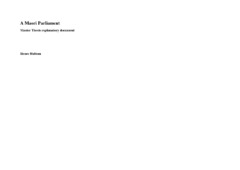 Holtom, R. (2010?). A Maori parliament. Master Thesis explanatory document. [An unpublished thesis partial fulfillment of the requirements for the degree of Master of Architecture (Professional), Unitec Institute of Technology.]

Over the last few decades Maori culture has been undergoing a revival and change; with the establishment of new institutions and organisations. Maori language immersion programmes have been developed and Te Reo Maori is being conducted in schools. The strengthening of tribal structures, councils and the renewal of tribally owned assets is becoming more apparent. The establishment of Maori organisations such as radio stations, a television channel and the political representation of Maori MP’s in the New Zealand Parliament are all key indicators of the representation of Maori within New Zealand’s society and culture.(1) I wanted to engage with Maori culture and values to design a Maori Parliament as an architectural response to issues of Maori democracy, self determination and aspirations. 1. New Zealand in Brief, Maori, Urbanisation and Renaissance, accessed 23 March 2010, http://www.teara.govt.nz/en/maori/5