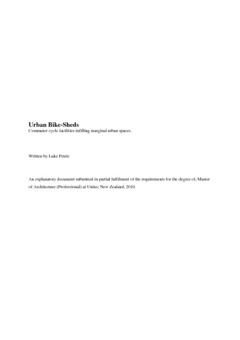 This research project investigates the potential of developing currently un-, and under-utilised compact sites within the existing urban built environment. The base programme of the project involves the provision of dedicated commuter cycling facilities in the central city. Infill construction and cycling transport promotion are, each in their own right, recognised strategies for improving the sustainability of our cities as we move into the future. With vast amounts of countryside, New Zealanders have a strong traditional tendency to 'sprawl' rather than intensify existing urban areas. Many Asian and European countries set the benchmark for 'infill' development and optimum land use, often with fascinating displays of compact developments. Traditionally New Zealand has not had these same pressures to economically justify developing and occupying such tiny scraps of land. As the New Zealand built environment has spread, territorial authorities have sought to place limits on expansion, and are now making conscious decisions to further increase the building density in central city areas. With these strategies in place, continual rising land prices, and motor vehicle dependency caused by 'urban sprawl', it is time to start exploring these potential spaces left over from past development as a serious option for current development. The concept of infill cycle facilities was conceived as a logical response to the rise in the popularity of cycling in New Zealand in recent years and the consequent need for additional secure facilities to cater for commuter cyclists, cycling to and from the central city. The increased popularity of cycling is a great thing for the health of participating New Zealanders, but to have any positive environmental effect cycling needs to also start replacing motorised commuter transport. Auckland is a city developed around the motor-vehicle and is highly dependent on this form of transport. Central Government has recognised the social and health benefits of cycling by committing $40 million to walking and cycling infrastructure over 2009-2012. Government spending on cycling infrastructure is a great way to encourage people into cycling and provide positive public awareness of the benefits. Progress from recent improvements on cycling infrastructure across the region is beginning to be seen with the increase in cycle movement statistics, increasing the number of people choosing to take their bike. Similar cycling concepts have been designed and implemented internationally with great success. New Zealand, too, needs to take action to increase participation in alternative transportation and provide facilities to further encourage and meet the resulting demand. The fact that the basic design of the humble bicycle has generally remained unchanged over the last 120 years says something about the efficiency of this often unappreciated machine.