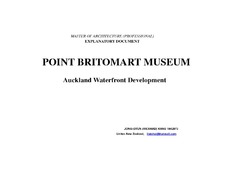 Point Britomart of Auckland city has not existed since it was demolished in 1880’s. Instead, the place is occupied by commercial office buildings and apartments, which is the reflection of contemporary society. It is to be regretted that the identity and public memory of point Britomart is fading away. The purpose of this research is to investigate the possibility to restore the original identity of point Britomart and improve Auckland waterfront environment as a public space. A study of city’s growth pattern can make a useful contribution to understand the sense of place as a city. Particularly, in regard to the continuation and reinforcement of Auckland’s identity, the study of the shoreline transition will help us to think of architecture as comprising an articulation with the past, the site and contemporary social politic. METHODOLOGICAL APPROACH OF THE PROJECT History Document The existing shoreline of Auckland waterfront at Britomart is the result of last 100 year’s land reclamation. The shoreline and land form has been changed by the ambitions of a changing society. The history document of Auckland waterfront will be constructed based on two different graphical references, which explain how much land has been reclaimed and changed from original shoreline. The title of the base map is ‘Plan of north shore’ which was drawn in 1866. These maps were collected from the ‘special collection’ in the Auckland city library and shows the original shorelines and land divisions around Auckland Waitemata harbors. Urban acupuncture Acupuncture - the treating of disorders by inserting needles into the skin at points where the flow of energy is thought to be blocked. The identifying the points involves deep understanding of the city environment. The urban acupuncture analysis will help us to develop deeper side of the Auckland city. PROJECT DEVELOPMENT The fragmentary forms of Point Britomart will be restored and developed. The design process is experimental at the early stage. Different ideas and forms are to be tested on physical and virtual model. Restoring the visual memory of Point Britomart as an architectural idea will be the key element of this project. This project will restore such elements of Point Britomart: 1) Exposed earth layers 2) Panoramic harbour view 3) Elevations from the commercial 4) Relationship between land and water