Making war real: The discourse of professional journalism and the Iraq War, 2003 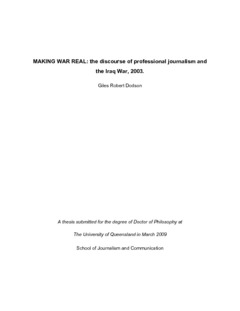 Dodson, G.R. (2009) Making war real : the discourse of professional journalism and the Iraq War, 2003. A thesis submitted for the degree of Doctor of Philosophy at The University of Queensland.

As this thesis argues, the pursuit of professionalism in journalism should be understood as a discourse that hegemonises the discursive formation of journalism and produces news that fulfils professional needs. Professionalism articulates and states its object, in this case war, rather than apprehending it through fidelity to normative criteria, such as the objective truth of ‘reality’. Conceiving of professional journalism as such provides a means of understanding and analysing media production outside of the theoretical bounds of ‘ideology critique’. Empirically, this thesis takes Australian war journalism during the invasion of Iraq, 2003, and professional journalistic discourse observed in interview with a selection of Australian Iraq war correspondents as its object of analysis. Previous analyses and critiques of journalism generally, and war journalism specifically, rely heavily on some conception of journalism as ideological. As this thesis argues this category of analysis is theoretically redundant and the discourse perspective provides a more fecund and insightful critique of journalism. The thesis provides a historical and critical account of professionalism’s emergence, eventual domination and hegemony of the journalistic field. It is argued that professionalism, as an articulation of social and cultural norms, retains its central cultural legitimacy in journalism, and is expressed through the journalistic norms of objectivity, independence and news values. It is argued that within the contemporary cultural conditions of postmodernism and neo-liberalism these modern norms are no longer credible and useful in journalism. The empirical analysis of the professional discourse undertaken by the thesis demonstrates journalism as a pragmatic and contingent process of meaning creation, which legitimates and normalises its practices, forms and pre-occupations. In this sense the discourse, as a regime and process of meaning creation, produces its object, or makes war ‘real’ for news audiences, rather than reflecting the independent reality of war. In the context of the Iraq invasion, 2003, the thesis reveals many limitations, contradictions and inconsistencies within journalistic norms and subjectivities. The thesis also demonstrates how the discursive needs of professional journalism tend to be coincident with the strategic communication intent of military and political power. This stands in marked contrast to journalism’s professed normative democratic function and to analyses of war journalism that consider this normative function irresistibly dominated by military and political power.

Doctor of Philosophy (Journalism and Communication), University of Queensland