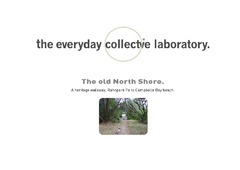 There are many interesting heritage sites and buildings within what used to be called North Shore City, most of these are protected, documented, valued by the local residents and enjoyed as a destination by visitors. What this exhibition explores are four significant sites that lay just beyond the better known and documented sites of Devonport, Takapuna and Northcote. These sites are situated in Castor Bay and Campbells Bay, and are within easy walking distance from each other. The sites vary in origin from an 17th century Maori settlement, to a 21st century environmental restoration project. All the sites except one have been researched and documented to varying degrees, the one site that was not; Memorial Avenue in Centennial Park, lay neglected by the city authorities for decades until 2009 when the Takapuna Community Board commissioned the everyday collective to undertake a site analysis, this resulted in a heritage classification for the avenue being established within the new management plan for the park. This document puts forward a proposition that links all four sites together as a heritage walkway connecting to the existing NZ Coastal Walkway system that runs along the eastern bays coastline. All these sites contain, or lay adjacent to, valuable architectural or landscape features that contain important stories from the past, stories that share common ground in the rich tapestry of the old north shore.