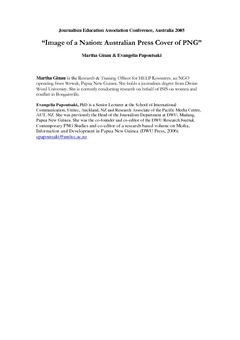 This article looks at the Australian press cover of Papua New Guinea. It argues that the coverage is negative and inadequate and contributes to the country’s negative image in Australia. No previous study has been carried out on this topic in this context. The research was based on a content analysis of randomly selected articles from the Australian Press over a period of three months in 2004 and a survey of four groups (foreign correspondents to PNG, journalists from the PNG mainstream media, PNG government media information services and political analysts). This study is based on the argument of Western media’s negative coverage of developing countries and involves some of the old arguments that have been debated between the developed and the developing world.