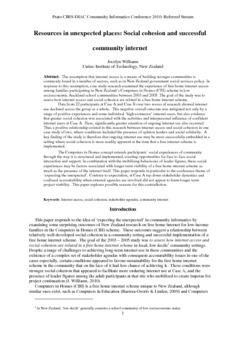 The assumption that internet access is a means of building stronger communities is commonly found in a number of sectors, such as in New Zealand government social services policy. In response to this assumption, case study research examined the experience of free home internet access among families participating in New Zealand’s Computers in Homes (CIH) scheme in low socioeconomic Auckland school communities between 2003 and 2005. The goal of the study was to assess how internet access and social cohesion are related in a free home internet scheme. Data from 22 participants at Case A and Case B over two waves of research showed internet use declined across the group as a whole. This negative overall outcome was mitigated not only by a range of positive experiences and some individual ‘high-connector’ internet users, but also evidence that greater social cohesion was associated with the activities and interpersonal influence of confident internet users at Case A. Here, significantly greater retention of ongoing internet use also occurred. Thus a positive relationship existed in this research between internet access and social cohesion in one case study of two, where conditions included the presence of opinion leaders and social solidarity. A key finding of the study is therefore that ongoing internet use may be more successfully embedded in a setting where social cohesion is more readily apparent at the time that a free internet scheme is implemented. The Computers in Homes concept extends participants’ social experiences of community through the way it is structured and implemented, creating opportunities for face to face social interaction and support. In combination with the mobilising behaviours of leader figures, these social experiences may be factors associated with longer term viability of a free home internet scheme as much as the presence of the internet itself. This paper responds in particular to the conference theme of ‘expecting the unexpected’. Contrary to expectation, at Case A top down stakeholder dynamics and confused accountability when external agencies are involved did not appear to harm longer term project viability. This paper explores possible reasons for this contradiction.