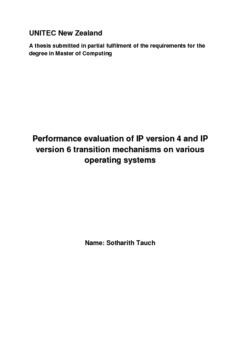 Tauch, S. (2010). Performance evaluation of IP version 4 and IP version 6 transition mechanisms on various operating systems. A thesis submitted in partial fulfilment of the requirements for the degree in Master of Computing, Unitec New Zealand.

Internet Protocol version 6 is the Next Generation Internet Protocol developed by Internet Engineering Task Force to substitute the current Internet Protocol version 4. The reason of this substitution is the exhaustion of IPv4 address space. However, it is not possible to migrate from IPv4 to IPv6 in a short period due to the size and complexity of the Internet infrastructure. Thus, IPv4 will coexist with IPv6 for a long time before the entire Internet infrastructure can fully migrate to IPv6. IETF Next Generation Transition Working Group (NGtrans) developed IPv4/IPv6 transition mechanisms that help IPv4 and IPv6 coexist on the Internet during the migration period. The purpose of this research is to evaluate performance of two tunnelling mechanisms (Configured Tunnel and 6to4 tunnelling mechanisms) operate on four selected operating systems (Windows Server 2003, Windows Server 2008, Ubuntu 9.10, and Fedora Core 11). This performance measurement research examined on two types of transmission protocols namely UDP (User Datagram Protocol) and TCP (Transmission Control Protocol). The result of this research focused on four metrics such as throughput, delay, jitter, and CPU utilization. The experiments conducted using different payload sizes, ranging from 64 bytes to 1536 bytes. Results of this experimental research indicated that, Configured Tunnel and 6to4 perform differently on Windows Server 2003, Windows Server 2008, Ubuntu 9.10, and Fedora 11. By using TCP as transport protocol, Configured Tunnel on Fedora 11 produced the highest throughput. However, it also produced a very high delay as compared to Ubuntu 9.10, Windows Server 2003, and Windows Server 2008.On the other hand, after measuring UDP traffic, the results indicated that 6to4 on Ubuntu 9.10 produced the highest throughput with the lowest delay, which designate as the best choice for video and voice traffics.