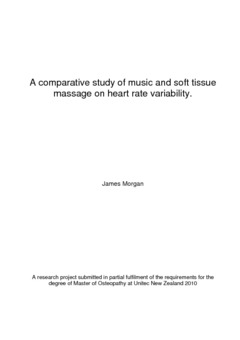 Morgan, J. (2010). A comparative study of music and soft tissue massage on heart rate variability. A research project submitted in partial fulfilment of the requirements for the degree of Master of Osteopathy at Unitec New Zealand.

BACKGROUND AND OBJECTIVES. Music and massage are considered by many to promote relaxation. However there appears to be insufficient supporting evidence to validate physiological changes that may reflect relaxation. This study examined the physiological effects of music and massage as indicated by heart rate variability. The low to high frequency (LF/HF) ratio component of heart rate variability was used to indicate changes in the autonomic nervous system. The autonomic nervous system controls many functions of health in the body and is divided into the sympathetic nervous system (responsible for increasing heart rate), and the parasympathetic nervous system (responsible for decreasing heart rate). An increase in LF/HF is believed to indicate sympathetic nervous system activity, or sympathetic dominance, while a decrease indicates parasympathetic activity. Therefore a decrease in LF/HF would be expected should physiological relaxation occur. METHODS: 16 male subjects attended four sessions in random order involving music, massage, music and massage combined, and a control. Each intervention lasted 10 minutes with a 10 minute pre- and post-intervention washout time. Heart rate data were recorded for all sessions, and heart rate variability was analysed. RESULTS: There was no statistically significant difference in LF/HF between the four intervention studies. Additionally for each of the intervention studies, there was no statistically significant difference between pre-intervention, intervention and post-intervention. However, in a sub-group of subjects that had low heart rates (less than 60 beats per minute) an increase in LF/HF was found (p<0.05) in response to massage, though not in response to music, music and massage combined or the control intervention. CONCLUSION: These results suggest no physiological effect of music or massage interventions occurs in the autonomic nervous system as indicated by heart rate variability. In the sub-group of low heart rate responders (n = 5), an increase in LF/HF indicating sympathetic dominance in response to massage was found. This finding may suggest that massage in fact has a stimulating (sympathetic) rather than relaxing (parasympathetic) effect on subjects with low heart rates. This same effect however was not shown by these subjects when massage was combined with music.