Coaching for improving teacher practice within a professional development initiative 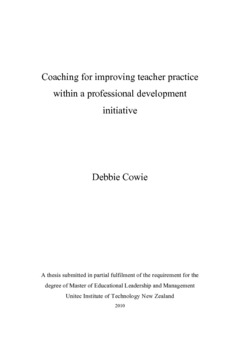 Cowie, D. (2010). Coaching for improving teacher practice within a professional development initiative. A thesis submitted in partial fulfilment of the requirement for the degree of Master of Educational Leadership and Management Unitec Institute of Technology, New Zealand

RESEARCH QUESTION: Why use coaching as means to improve teaching practice? This research set out to find how coaching was being used to support professional learning and development of teachers in a specific professional development context. The focus was to look at the coaching process from the perspectives of those involved, namely principals, coaches and teachers who were being coached, referred to as coachees. The research was driven by the questions “why use coaching and what are the links between coaching and performance appraisal?” The literature indicated that there was often confusion associated with the terminology of coaching and mentoring. There were other issues that surround coaching such as the links between coaching and supervision, change management, the role of leadership in coaching and the implementation of coaching. A qualitative methodology was used and the sample population was purposive because it was based on a cluster of schools, which were involved in an Extending High Standards Across School (EHSAS) professional development initiative, that had identified that they would be using coaching as part of their project. All seven primary schools in the project took part in the research. Each principal was interviewed individually and two focus groups were held, one for seven coaches and one for five teachers from four schools. The findings show that it is the nature of the relationship between coach and coachee that is important. A balance of power needs to be established, regardless of the positional authority the coach may hold, where the responsibility and ownership for learning lies with the teacher. There needs to be clear understanding by all parties in identifying the role of the coach in terms of coaching and supervision. The recommendations are that those in leadership positions need to establish a culture of learning to support the coaching process and that all involved need a shared understanding of the language of coaching and supervision. Further research needs to be done to identify the links between coaching and improved outcomes for students.