Architecture, the bridge between two ethnicities 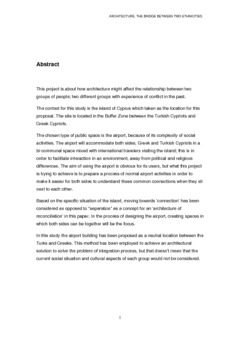 RESEARCH QUESTION: How might architecture foster greater empathy between two communities? This project is about how architecture might affect the relationship between two groups of people; two different groups with experience of conflict in the past. The context for this study is the island of Cyprus which taken as the location for this proposal. The site is located in the Buffer Zone between the Turkish Cypriots and Greek Cypriots. The chosen type of public space is the airport, because of its complexity of social activities. The airport will accommodate both sides, Greek and Turkish Cypriots in a bi-communal space mixed with international travelers visiting the island; this is in order to facilitate interaction in an environment, away from political and religious differences. The aim of using the airport is obvious for its users, but what this project is trying to achieve is to prepare a process of normal airport activities in order to make it easier for both sides to understand these common connections when they sit next to each other. Based on the specific situation of the island, moving towards ‘connection’ has been considered as opposed to “separation” as a concept for an ‘architecture of reconciliation’ in this paper. In the process of designing the airport, creating spaces in which both sides can be together will be the focus. In this study the airport building has been proposed as a neutral location between the Turks and Greeks. This method has been employed to achieve an architectural solution to solve the problem of integration process, but that doesn’t mean that the current social situation and cultural aspects of each group would not be considered.