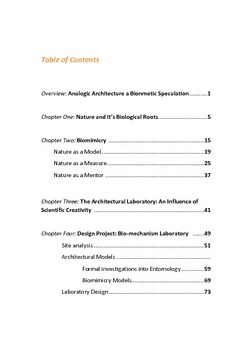 There is a beauty to science, and a science to the beauty that is intrinsic in art. The exploration of art and science in architecture are intertwining studies in the pursuit of new inspiration and ideas. Art and science are both processes in the understanding of our world and all its complexities in naturei. Natural inspirations, Biomimicry and biophilic designii have been present in architectural history since the early Eighteenth Century. Architects, designers and engineers have returned to their natural and biological roots to investigate and seek out solutions to design and performance-based problems within architecture. The first chapter, Nature and its Biological Roots, sets the scene for bio inspiration within the Twentieth Century. Nature and its historical roots lie deep within the Eighteenth Century when immense scientific and biological discoveries were made. It was from these findings that the foundations for modern-day thinking and technology were derived. The second chapter on Biomimicry discusses the idea of Biomimicry as a method of correcting the problems left behind from the Industrial Revolution and Modernism. Biomimicry does not seek to simply imitate or represent nature but endeavors to learn from nature. Janine M. Benyus expresses the idea that nature should be practiced and comprehended in accordance with three key points: Nature as a Model, Nature as a Measure, and Nature as a Mentor. This chapter expresses how, through these themes, Biomimicry has been used in an architectural discourse through experiments, methods and architectural buildings. The third chapter, Architectural Laboratory: an Influence of Scientific Creativity, discusses the question of whether architecture of a laboratory influences a scientist's creativity and productivity. This chapter looks at this question to identify the importance of architectural design as a stimulating environment for creating innovative thinking. Biophilia is the theoretical idea that is concerned with bringing humans back into contact with nature. Biophilia stimulates the senses and helps the mind to think outside of the box. Architects and scientist have been researching the neurological effects of humans and nature within a built environment to establish how architecture and nature can influence creativity and productivity. The fourth chapter, Natural Inspirations: Design Work, is a comprehensive description of my architectural design and how Biomimicry, biophilia and bio-inspiration has influenced and shaped the design process. This chapter includes a series of models and formal investigations into the ideas that surround Biomimicry and bio-organisms, and tests what architecture can learn from biology. The formal investigation tests the current methods related to structure, construction, tectonics and performance based processes and material.