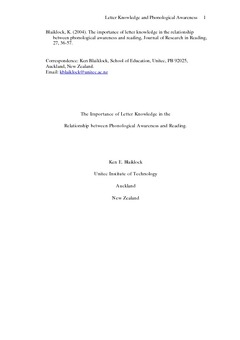 Blaiklock, K. (2004). The importance of letter knowledge in the relationship between phonological awareness and reading, Journal of Research in Reading, 27, 36-57.

Previous correlational and experimental research has found a positive association between phonological awareness and reading skills. This paper provides an overview of studies in this area and shows that many studies have neglected to control for extraneous variables such as ability, phonological memory, preexisting reading skills, and letter knowledge. The paper reports on the results of a longitudinal study that took account of these variables when examining the relationship between phonological awareness and reading for a group of children during their first two years at school. Children showed rhyme awareness before they began to read but were unable to perform a phoneme deletion task until after they had developed word reading skills. Concurrent and predictive correlations between phonological awareness scores and later reading were often significant and remained so after adjusting for verbal ability or phonological memory. Controlling for letter knowledge, however, reduced most correlations to nonsignificant levels.

The definitive version of this article is available at www3.interscience.wiley.com