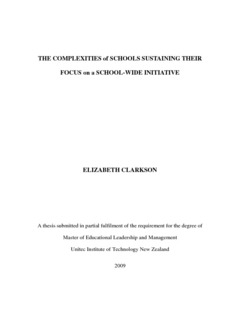 Clarkson, E. (2009). The complexities of schools sustaining their focus on a school-wide initiative. A thesis submitted in partial fulfilment of the requirement for the degree of Master of Educational Leadership and Management, Unitec Institute of Technology, New Zealand

Within a framework of sustainability and change this research set out to examine ways that three primary schools have attempted to sustain a school-wide Talent Development Initiative once their three year, Ministry of Education, funding had ceased. This research also examined the different interpretivist perceptions and experiences held by the three groups of stakeholders within each school: principals, Talent Development Initiative (TDI) coordinators and focus groups (classroom teachers) both during and after the TDI’s implementation. A qualitative methodology was employed for this small scale research. Three principals and three TDI coordinators were interviewed using a semi-structured interview format. All six of these participants had played a key role in the implementation of a TDI in their respective schools since its inception. Thirty classroom teachers across five focus groups, in three different schools, were involved where responses to questions were discussed within a group. In this way the findings were less likely to be intentionally influenced by the interviewer. The findings in this research have revealed that the issues of sustaining an initiative after external funding had ceased are complex. Issues include: decision-making processes and ownership, professional development and induction, and initiative overload. The modification of these issues either contributed to or hindered the level of ownership experienced by all stakeholders. Among all stakeholders there were perceptions or assumptions of the change processes that were viewed differently according to where a member was situated managerially in their school structure. However the perceptions or assumptions of an initiative’s implementation that are held by all stakeholders were not so easily aligned and unless questioned, appear to influence the complexities and tensions inherent in sustaining an initiative. How one group interprets the actions of another group and how they are constructed into perceptions and assumptions is the essence of what makes sustainability such a complex issue.