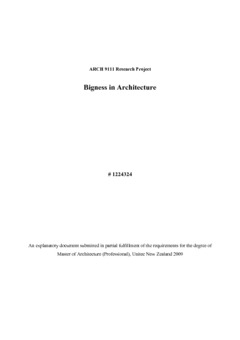 Hadler, J. (2009). Bigness in architecture. (Unpublished document submitted in partial fulfilment of the requirements for the degree of Master of Architecture (Professional)). Unitec Institute of Technology, Auckland, New Zealand. Retrieved from https://hdl.handle.net/10652/1418

This research project is about how we should be designing big buildings in big cities. In general, big buildings tend to ignore their context by becoming independent objects in space. These objects, or space occupiers, are inwards focused, and do not create any form of external place for people to dwell. They transform the city from a place of public activity to become a place driven by efficiency and profit, a place absent of experience and quality; the street has become a residue. Nevertheless, we will never stop designing big buildings, but I suggest that the way we do so should consider the city as an entity, highlighting public activity, quality, experience and formal expression. In other words, there is a need to reduce big building’s impact without reducing their size. Through a critical analysis of Rem Koolhaas’ theory Bigness or the problem of Large1 from his book S, M, L, XL, I have developed a counter argument to the theory, resulting in one alternative method of designing large-scale buildings. This method, fragmentation, makes it possible to design a big building that does not reject its context, but merges into it, creating places of public interest. The idea is to divide the building into smaller pieces and rearrange them in a way that their totality cannot be perceived from any point of view, making it appear smaller than it actually is. However, the research shows that fragmentation needs a specific system that determines where, when and how it happens. Based on the system of a rhizome, the final building extends into the city, making logical connections, formally and programmatically. This method has been thoroughly tested through physical model exercises, sketch analysis and computer aided design (CAD). The result is a big building that is not perceived as big but blends into its context, creating external spaces for public activity. 1 Koolhaas, REM. S, M, L, XL. (Köln, Germany, Benedikt Taschen Verlag GmbH, 1997) p. 495