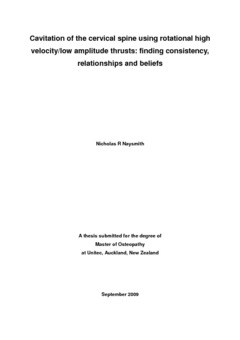 Background: There is limited evidence to validate many of the techniques that osteopaths and other manual therapists use. Many techniques are performed by manual therapists without complete understanding of the mechanical and physiological mechanisms involved. The high velocity/low amplitude (HVLA) thrusts that are frequently used in osteopathic practice are one such example. Several authors suggest that accuracy (cavitating only the dysfunctional spinal segment) of the thrust is important for a successful clinical outcome (Meal & Scott, 1986). However, there is a division within the profession as to how accurate these thrusts need to be to create clinically relevant outcomes (Beffa & Mathews, 2004; Meal & Scott, 1986; Ross, Bereznick, & McGill, 2004). Recent research suggests that the accuracy of HVLA thrusts in both the thoracic and lumbar spine may be limited (Ross, Bereznick, & McGill, 2004). Objectives: The first aim of this study was to determine how consistently an experienced osteopathic practitioner could target a side of the cervical spine using one rotational HVLA technique in multiple sessions. This study will also help determine which side of the cervical spine produces a cavitation sound during a primary lever left rotation HVLA thrust. The second part of this research surveys osteopaths registered to practice in New Zealand on their beliefs regarding sites of cavitation during cervical spine HVLA thrusts. Design: Part 1: Observational study Part 2: Survey Methods: Part 1: Thirty-three (17 male and 16 female) participants aged between 18 and 40 volunteered for this study. One experienced osteopathic practitioner performed a single primary lever left rotational thrust to C3/4 segments of the cervical spine to each volunteer on three separate occasions over a four week period. Cavitation sounds were recorded via sensitive microphones attached to the posto-lateral aspects of each volunteer’s neck at the level of C2. Analysis of the recorded wave forms indicate the side where the cavitation of the cervical facets has occurred. Part 2: A web-based survey was designed and emailed to 164 osteopaths within New Zealand. Demographic questions sought details on age, gender, schooling and the like, and also asked participants to watch four videos of commonly applied cervical spine manipulations. Osteopaths were asked to indicate on the survey which side of the cervical spine they believed the cavitation occurred during each of the thrusts. Results: The findings from Part 1 of the study suggest that this osteopath can cavitate, with reasonable consistency, the right side cervical facets using a left rotational HVLA thrust. The findings also show that this type of thrust is most likely to produce cavitations ipsilateral to the practitioner’s applicator hand. The findings from Part 2 of this research show that there is consensus amongst osteopaths registered to practice osteopathy in New Zealand regarding the side where cavitation should occur during various HVLA manipulations of the cervical spine. There is more agreement from these osteopaths regarding the rotational style thrusts than the side-bending thrusts. Conclusions: The results of this study show that this practitioner was able to cavitate zygapophyseal joints on the right side of the cervical spine in 75 out of 86 successful manipulations (87%). Out of the 86 thrusts 53 cavitations were purely on the right side while on 22 occasions bilateral events occurred that contain right side cavitations. This study confirmed that a left rotational HVLA thrust is more likely to cavitate the right side facets of the cervical spine. This finding is in agreement with the current anecdotal evidence and clinical biomechanical principles and with the accepted theories taught in many osteopathic colleges, but is in contrast to the findings of Bolton et al. (2007) and Reggars and Pollard (1995). The experimental findings in Chapter Two were consistent with the reported beliefs from the surveyed osteopaths. These osteopaths mostly agreed regarding side of cavitation during cervical HVLA thrusts. There was 78% agreement that a left rotational HVLA thrust will cavitate the right side facets of a patient’s cervical spine. There was 70% consensus that right rotational thrusts will cavitate the left side facets. There was approximately 60% agreement on side of cavitation associated with both left and right side-bending thrusts which was lower than for rotational thrusts.