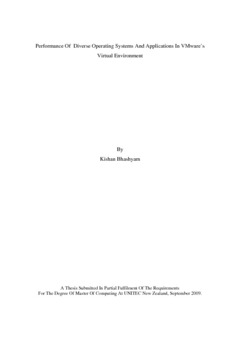 Bhashyam, K. (2009). Performance of diverse operating systems and applications in VMware’s virtual environment. (Unpublished document submitted in partial fulfilment of the requirements for the degree of Master of Computing). Unitec Institute of Technology. Retrieved from https://hdl.handle.net/10652/1399