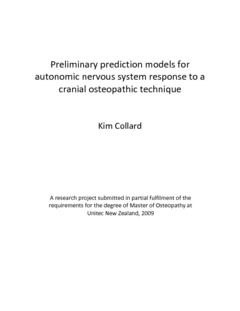 Background and Objectives Osteopathy in the cranial field (OCF) is a contentious area of manual therapy. The literature base has attracted much debate, and consists of theories, anecdotal claims and limited academic research. As such, the potential mechanisms and effects of OCF remain poorly understood. Current research into the physiological effects of OCF is directed toward changes in measures of autonomic nervous system function. One cranial osteopathic technique, the CV4, is commonly claimed to increase parasympathetic activity. The aim of this study was to determine if the CV4 has the potential to increase parasympathetic nervous system activity in some individuals, to examine the notion of ‘responders’ and ‘non-responders’ to the CV4. Further, this study investigated variables from the participants’ history which predicted response to the CV4, with the objective of identifying responder characteristics in order to assist future research into the mechanisms and effects of OCF techniques. Methods Heart rate variability was measured in thirty participants during an experiment consisting of four phases: baseline, touch control, intervention (CV4) and post-intervention. The CV4 was delivered by one of three registered osteopaths who were experienced in cranial approaches. Response and non-response to the CV4 were operationally defined for the study. Changes in heart rate variability across the phases of the experiment were analysed individually for each participant to determine response or non-response to the CV4. Potential predictor variables for response were collected prior to the experiment. Following allocation of participants into response and non-response categories, logistic regression was used to determine which, if any, variables predicted response to the intervention. Results 14 participants were classified as responders, 16 participants were classified as non-responders. Logistic regression demonstrated predictive value of the variables relating to the individuals’ history of physical trauma and baseline heart rate variability to predict response. The variable height offered marginal predictive value. Conclusion Results of this study support claims that the CV4 has the potential to increase parasympathetic activity in some individuals. Short-term parasympathetic response to the CV4, determined by spectral analysis of heart rate variability, may be associated with an individual’s baseline ANS activity, history of physical trauma, and possibly height. Further research is required to refine understanding of response to the CV4, and to establish the relevance of the prediction models developed in this study.