Estimation of instantaneous and cumulative loads on the low back and neck of osteopaths while performing the pre-thrust positioning for a high velocity, low amplitude thrust technique applied to the thoracic spine 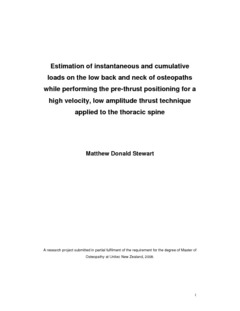 Stewart, M. D. (2008). Estimation of instantaneous and cumulative loads on the low back and neck of osteopaths while performing the pre-thrust positioning for a high velocity, low amplitude thrust technique applied to the thoracic spine. Unpublished thesis submitted in partial fulfillment of the degree of Master of Osteopathy, Unitec New Zealand, New Zealand.

Background and objectives: There is epidemiological evidence that musculoskeletal disorders of the back and neck are prevalent among healthcare professionals. The aim of this study was to quantify instantaneous and cumulative loads on the low back and neck of osteopaths while performing the pre-thrust positioning for a commonly used high velocity, low amplitude (HVLA) thrust technique applied to the thoracic spine. Method: The sample included 8 undergraduate students and 16 graduate students in the osteopathy programme at Unitec New Zealand and two registered osteopaths (male n= 16, female n=10). Digital still images of operators performing the pre-thrust positioning for a thoracic spine HVLA thrust technique on a variable height table were analysed with motion analysis software. From the observed data, instantaneous compression and shear loads at the L5-S1 and C7-T1 segments were estimated using a static biomechanical model. Estimates of weekly and yearly cumulative compressive and shear loads were calculated based on assumptions from osteopaths’ anecdotal clinical experience. Results: Instantaneous compression loads on the L5-S1 segment ranged from 1023 N to 7575 N and 33 N to 477N on the C7-T1 segment. Instantaneous shear loads on the L5-S1 segment ranged between 160 N and 829 N and between 18 N and 112 N for the C7-T1 segment. Conclusions: This study found a distinct correlation between body mass and instantaneous lumbosacral spinal loading (Pearson’s r = 0.96). The magnitude of instantaneous compressive lumbosacral spinal loads in this study were found to be within the range to cause vertebral endplate fracture. Lumbosacral shear forces were found to be above acceptable levels as recommended in spinal safety guidelines but below levels capable of causing pars interarticularis fracture. Therefore, manipulative techniques that involve forward flexion may increase instantaneous compressive and shear lumbosacral spinal loading above generally agreed acceptable limits for spinal safety.

Musculoskeletal disorders of the back, Pre-thrust positioning