Knowing hands converse with an expressive body: An experience of osteopathic touch 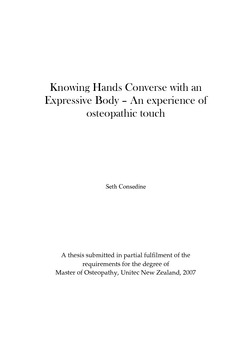 Aim – The aim of this phenomenological study was to examine and describe the patient’s experience of touch during a consultation with an osteopathic practitioner. Background – Touch is the process by which one person physically contacts another individual and as such plays an integral role in osteopathic practice. Osteopathic practitioners use touch in almost every facet of care including examination, diagnosis and treatment. Although this form of communication is intrinsic to osteopathic practice, there has been no research undertaken to date that qualifies the experience of osteopathic touch within a treatment session. Methods –Three local osteopaths identified five potential participants from their own practice. Data were recorded during five face-to-face semi-structured interviews that were conducted by the primary researcher. Interviews were transcribed and the textual data was analysed using the principles of van Manen’s (1997) hermeneutic phenomenology. Using this approach, significant themes were identified in the data and a description of the lived experience of osteopathic touch emerged. Results – Three phenomenological themes were identified in the data and broken down into nine constituent subthemes. Theme [A] The Process – a physical interaction, drew attention to the physical patient-practitioner relationship and the physical and psychological implications of this interaction. Theme [B] Professionalism – a practitioner’s responsibility explored the role of touch in developing professional boundaries and emphasised the patient’s expectations surrounding the physical contact, while Theme [C] Reassurance – a therapeutic necessity examined the role of touch in reassuring the patient about their presenting complaint and the practitioner’s medical knowledge and technical skill. Conclusions – The experience of touch for the participants in an osteopathic session is one of care and security. For the participants touch plays a critical role in the therapeutic relationship by supporting and validating their experiences and by communicating practitioner humanism and professionalism. Furthermore, the experience of touch was identified as a critical component of the therapeutic interaction. Indications for further research and implications for the osteopathic profession are discussed.