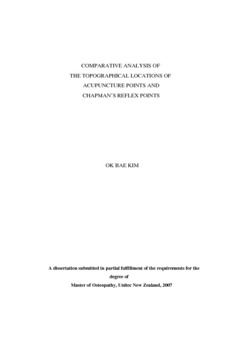 Introduction: Both Acupuncture points (APs) and Chapman’s reflex points (CRPs) are used to treat the internal organ systems of patients throughout the world. The AP system developed from Eastern medical philosophy and the CRP system from Western osteopathic philosophy. Although the two point systems started separately, their final purposes are the same, to treat disturbances of internal organ system. To date, no data has been published which compare relationships between the two point systems. The aim of this study was to find any relationships between the two point systems. Methods: A Single Model Experiment (SME) based on a literature-based analysis was used to find their relationships. The data collection incorporated both literature data and experimental data. Based on the data from the literature, the CRP system (102 CRP points) and associated APs (102 points) were mapped onto both anterior and posterior surfaces of the body of the participant and their distances from anatomical landmarks to APs and from APs to nearby CRPs were measured. The measured data were statistically analyzed Results: Literature-based analysis showed that of the APs identified as anatomically near by one of the CRPs, 71.1% of the anterior points and 93.1% of the posterior points were related pathologically to CRP points. SME revealed that: The topographical congruency of the pathologically related points was in the range of 20.6% (anterior points) - 44.2% (posterior points). Mean distance between AP and CRP of the posterior points (16.5 ± 1.9 mm) was smaller than the anterior points (27.8 ± 6.0 mm) for pathologically related points. Nearest neighbour analysis revealed that the distribution pattern of the two point systems on the surface of human body was between random and regular for both anterior and posterior points. Intraclass correlation coefficient suggested that the distance of APs from the anatomical landmark was not a predictor of the distance from the APs to the CRPs. Conclusion: This study has provided clinical evidence of a close relationship between the AP and CRP system on a single subject. This study is the first to map these two point systems on a human body. The data recorded forms the basis for subsequent study of these two point systems.