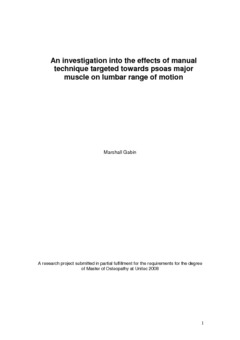 Gabin, M. (2009). An investigation into the effects of manual technique targeted towards psoas major muscle on lumbar range of motion. Unpublished thesis submitted in partial fulfillment of the degree of Master of Osteopathy, Unitec Institute of Technology, New Zealand.