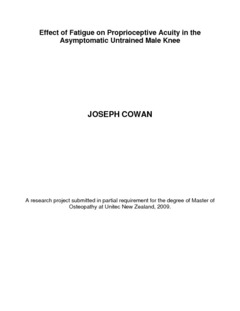 Purpose: There is empirical evidence to suggest that fatigue may contribute to altered neuromuscular awareness and reduced control of the lower limb leading to a subsequent reduction in proprioception and dynamic joint stabilization. This dissertation comprises a literature review which identifies the need to investigate the effect of local muscular fatigue on joint position sense and hence proprioception. Due to epidemiological data stating the high prevalance of knee injury it was decided to study the knee joint of asymptomatic untrained males. Methodology: The sample involved sixteen male subjects selected on the criteria that they were all aged between 20-35 years, and did not have an abnormal knee range of motion, exceptional motor skills (i.e. elite athlete), vestibular/neuromuscular disorders, or osteoarthritis anywhere in the lower limb. All subjects completed a familiarization protocol then performed a series of knee joint repositioning exercises at three randomly selected, standardized target angles both before and immediately after a fatigue protocol. Absolute error in joint repositioning from the target angle was compared between the three different angles at baseline and post-fatigue. The fatigue intervention was complete when a subject’s maximal force output fell below 50% of their initial performance in both flexion and extension. All data were collected using a Biodex Isokinetic Dynamometer. Results: Proprioceptive acuity was not substantially affected by fatigue of the knee joint flexor and extensor muscles. An overall increase in joint repositioning efficacy of 3.3% occurred following the fatigue intervention. The type of error (overshoot or undershoot) in repositioning the limb was influenced by the position of the limb at the target angle with a more flexed target position leading to a predominance in overshoot (extension) error and vice versa. Conclusion: Fatigue does not appear to have a substantial effect on knee joint position sense, therefore, muscular fatigue in young healthy males does not appear to compromise proprioception. The position of the knee joint may influence an individual’s proprioceptive perception of an appropriate corrective/protective movement.