The effects of segmental vibration on hamstring range of motion 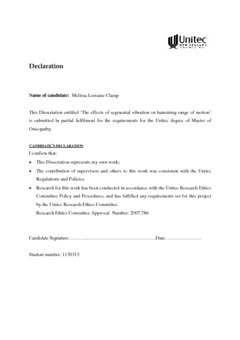 Clamp, M. L. (2009). The effects of segmental vibration on hamstring range of motion. Unpublished thesis submitted in partial fulfillment of the degree of Master of Osteopathy, Unitec Institute of Technology, New Zealand.

Introduction. There has been a growing focus within literature on the neuromuscular effects of whole-body and local vibration. The body of knowledge suggests that such effects may include improvement of muscular flexibility, as well as enhancement of stretching methods. The aim of this study was to investigate the effect of segmental vibration on the flexibility of the hamstring muscles when applied to the muscles at their resting length. Methods. Thirty-one recreationally-active male participants (aged 25.5 ± 4.9yrs, weight 80.5 ± 10.7kg, height 180.5cm ± 6.5cm) gave consent to participate in the study. Prior to initial baseline measurements, participants undertook a five-minute warm-up on a bicycle ergometer at a self-selected yet challenging speed, followed by two familiarisation trials of the active knee extension test (AKE) and passive straight leg raise test (PSLR) on both legs. During a single experimental session each participant underwent flexibility testing at three time points (baseline, Post 1, Post 2) measured with electrogoniometry. The AKE and PSLR tests were performed three times on each leg, at each time-point. The mean baseline AKE measurements were used to determine which leg was least flexible and would receive the vibration intervention (experimental), while the other leg acted as the control. The vibration device consisted of an oscillatory platform powered by a motor that generated a random waveform. Vibration (34 Hz, amplitude 3 mm, acceleration 42.2 m.s-2) was applied to the posterior thigh of the experimental leg for five one-minute periods alternating with one-minute rest intervals. Immediately after vibration Post 1 range of motion was recorded for both the AKE and PSLR on both legs. The Post 2 measurements were recorded ten minutes following the cessation of vibration. Results. The smallest detectable difference (SDD) calculated from a pilot reliability study was 3.7º and 4.6 º for the AKE and PSLR tests respectively. Taking into consideration the SDD, the likelihood that the true difference between the experimental and control group for the AKE was less than/equivalent/greater than the measured difference between the groups was 0/85/15% for baseline v Post 1 respectively, and 0/53/47% for Post 1 v Post 2 respectively. Corresponding data for the PSLR were 0/98/2% and 0/100/0% respectively. Conclusion. Segmental vibration applied at the specified parameters had no clinically significant effect on hamstrings flexibility measured by the PSLR. There was some indication of a potential clinically negative effect on the control leg measured by AKE, that may have been due to diminishing effects of warm-up or neurologically mediated crossed effects. Further investigation is required to examine whether effects persist beyond the Post 2 time-point.