The role of osteopaths in the recognition of melanoma : attitudes, knowledge and practices in melanoma screening within the osteopathic community 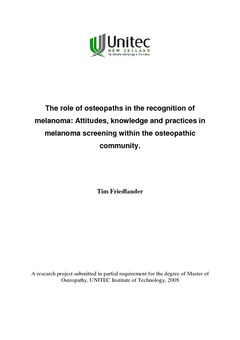 Friedlander, T. (2008). The role of osteopaths in the recognition of melanoma : attitudes, knowledge and practices in melanoma screening within the osteopathic community. Unpublished thesis submitted in partial fulfillment of the degree of Master of Osteopathy, Unitec Institute of Technology, New Zealand.

Background: Melanoma has the highest mortality rate of skin cancer in New Zealand, and has the third highest incidence rate of cancer overall. The severity of melanoma can be reduced through early detection, which can be achieved through early recognition of suspicious lesions. Osteopaths are primary health care practitioners, who can often examine a patient with the removal of the outer layers of clothing. As primary practitioners, they have a duty to provide for the general health of their patients, whilst the removal of clothing also allows an opportunity for non-invasive screening. As such, osteopaths may be in a good position to provide screening and risk assessment services for their patients. Purpose: Both the New Zealand Cancer Control Strategy: Action Plan 2005-2010 and the Report on the Early Detection of Skin Cancer in New Zealand by the Early Detection Advisory Group (2006) recommend action by associated health care providers to help improve the early detection of melanoma. This study aims to provide a baseline view of the current situation of melanoma screening within the New Zealand osteopathic community, and explore the role this community can play in the early detection of melanoma through development and dissemination of a self-completed questionnaire. Method: A self-completed questionnaire was developed incorporating both quantitative and qualitative aspects, encompassing practitioner demographics, attitudes and beliefs, current practices and knowledge. A short skill quiz was also included to investigate the ability of osteopathic practitioners to recognise melanoma and assess the level of knowledge in the community. This questionnaire underwent limited pilot testing and was assessed for validity and reliability before being distributed to registered members of the Osteopathic Council of New Zealand. Three hundred and fifty questionnaires were distributed through both postal and email services, resulting in 71 valid returns (a return rate of 20.3%). Results: A majority of osteopaths in New Zealand believed that skin cancer detection was important in New Zealand; with 93% believing it would benefit their patients, and 94% believing it was an issue in their region. Eighty-seven percent of practitioners believed osteopathy could help to reduce the mortality from skin cancer; however only 58% believed it was within their scope of practice to recognise skin cancer in their patients, with 15% answering that they were unsure. Despite this, 79% believed that they had a responsibility to manage their patient’s general health, and 92% believed they should be able to recognise a wide range of pathologies. Practitioners’ confidence in their knowledge was not high, however, with 79% believing they did not have enough knowledge about skin cancer and melanoma, and 30% believing that skin cancer was very difficult to detect clinically. A number of osteopaths reported they already looked for suspicious lesions on their patients, with 44% noting this often or always occurred. This was weakly correlated with how often practitioners asked their patients to disrobe during examination (r = .254, p < 0.05). A significant number of practitioners noted that they only occasionally noted suspicious lesions on their patients (51%), and a similar number (49%) noted that they only occasionally discussed skin cancer with their patients. Patient initiated discussions regarding skin cancer were less common, with 59% of practitioners noting this seldom or never happened. Referrals for suspicious lesions were also rare, again with 59% of practitioners noting this seldom or never occurred. A higher frequency of referrals was also moderately correlated with a belief that skin cancer was difficult to detect clinically (r = .430, p < 0.01). The reasons given for referral varied from referring for any lesion that caused patient or practitioner concern, to only referring those lesions for which the clinical signs were indicative of melanoma. Practitioners’ beliefs regarding their knowledge showed that most practitioners believed their knowledge of risk factors for melanoma and knowledge of melanoma detection was reasonable, but were less confident with being able to determine a melanoma from a benign mole or determining which moles would require referral to a skin specialist. These views were supported by the results of the skill quiz, although practitioners tended to over-estimate their knowledge of risk factors. Practitioners showed good sensitivity in image recognition of melanoma (75.2%), however specificity was poor (44.4%). Overall, practitioners believed osteopathy could play a role in the early detection of melanoma due to good opportunity, such examination being both part of the service and falling under the osteopathic philosophy of holism. Practitioners believed osteopathy could play a role in referral and patient education, but practitioner education and knowledge was a limiting factor. Conclusions: Osteopaths consider melanoma and non-melanoma skin cancer is an important topic in New Zealand, and early detection of melanoma would benefit their patients. They feel that osteopathy can be involved in the early detection of melanoma, both in the role of recognition and referral, and in patient education and support. For this to occur, however, educational courses and resources must be made available to increase the skill levels of the community. A significant proportion of osteopaths already check their patients for suspicious lesions as part of their routine examination; however there may be a tendency to over-refer benign lesions, especially for those osteopaths who are less confident in their skills in melanoma recognition.