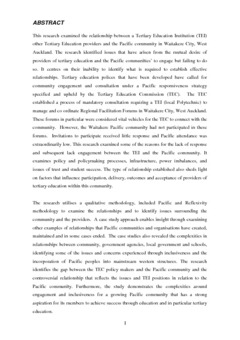 This research examined the relationship between a Tertiary Education Institution (TEI) other Tertiary Education providers and the Pacific community in Waitakere City, West Auckland. The research identified issues that have arisen from the mutual desire of providers of tertiary education and the Pacific communities’ to engage but failing to do so. It centres on their inability to identify what is required to establish effective relationships. Tertiary education polices that have been developed have called for community engagement and consultation under a Pacific responsiveness strategy specified and upheld by the Tertiary Education Commission (TEC). The TEC established a process of mandatory consultation requiring a TEI (local Polytechnic) to manage and co ordinate Regional Facilitation Forums in Waitakere City, West Auckland. These forums in particular were considered vital vehicles for the TEC to connect with the community. However, the Waitakere Pacific community had not participated in these forums. Invitations to participate received little response and Pacific attendance was extraordinarily low. This research examined some of the reasons for the lack of response and subsequent lack engagement between the TEI and the Pacific community. It examines policy and policymaking processes, infrastructure, power imbalances, and issues of trust and student success. The type of relationship established also sheds light on factors that influence participation, delivery, outcomes and acceptance of providers of tertiary education within this community. The research utilises a qualitative methodology, included Pacific and Reflexivity methodology to examine the relationships and to identify issues surrounding the community and the providers. A case study approach enables insight through examining other examples of relationships that Pacific communities and organisations have created, maintained and in some cases ended. The case studies also revealed the complexities in relationships between community, government agencies, local government and schools, identifying some of the issues and concerns experienced through inclusiveness and the incorporation of Pacific peoples into mainstream western structures. The research identifies the gap between the TEC policy makers and the Pacific community and the controversial relationship that reflects the issues and TEI positions in relation to the Pacific community. Furthermore, the study demonstrates the complexities around engagement and inclusiveness for a growing Pacific community that has a strong aspiration for its members to achieve success through education and in particular tertiary education.