School prospectuses: Why do New Zealand schools produce one? 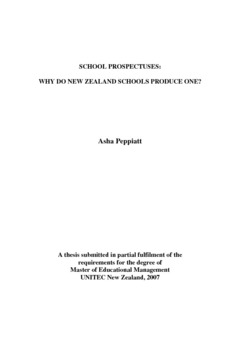 Peppiatt, A. (2007). School prospectuses: Why do New Zealand schools produce one?. Unpublished thesis submitted in partial fulfillment of the degree of Master of Educational Management, Unitec New Zealand, New Zealand.

Since the Ministry of Education 1988 introduced market principles and policies as recommended by the Picot Report, New Zealand schools have been encouraged to use marketing strategies to ‘sell’ their school. For many schools marketing is a challenging idea, however, it appears that increasingly schools have to promote themselves to attract more students and thus gain more financial support from the government. As competition between schools increases for the same students in an area, prospectuses could be viewed as promotional materials. Although New Zealand schools are not legally required to produce a prospectus, it may well be a parent’s first impression of a school. This research study questions whether the prospectus makes a significant difference to the attraction and retention of students and promotes the image of the school. This study examined 19 secondary school prospectuses in selected New Zealand North Island areas from a qualitative and quantitative stance. Two methods of data collection were used: a Content Analysis on 19 prospectuses, and two questionnaires both of which were given to the five sample schools who agreed to be part of the study. The first questionnaire was for parents of Year 9 students in the sample schools and the second questionnaire was for the school prospectus production teams. The results indicate that there are very few similarities between prospectuses and a wide range of differences. The language used in the prospectuses was difficult for the majority of the public whilst some prospectuses used very few words; some were very well presented, and some did not contain information sought by parents. The findings suggest that parents want to retain the prospectus as a reference guide to the school but most did not use it to select their child’s school. The results indicated that schools use prospectuses for image projection in the main and as a reference for prospective employees. The prospectus is also used to promote the vision and goals of the current principal rather than that of the school. No members of the Board of Trustees participate in the design of the content of the prospectus.