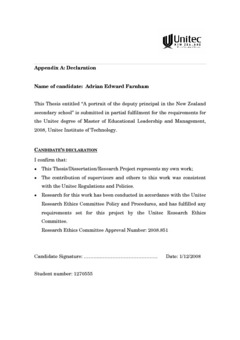 Farnham, A. E. (2009). A portrait of the deputy principal in the New Zealand secondary school. Unpublished thesis submitted in partial fulfillment of the degree of Master of Educational Leadership and Management, Unitec Institute of Technology, New Zealand.

The role of the deputy principal in the secondary school is one that has attracted much less research interest as compared to the role of the principal. The intentions of this research study were to explore the role of the deputy principal in the secondary school. Three research questions were formulated, namely what are the roles and responsibilities of the deputy principal, what are the levels of satisfaction experienced by them in their current roles and lastly what is their role in the leadership of learning within the secondary school. A qualitative methodological approach was undertaken encompassing the methods of documentary analysis, questionnaires and group interviews. The findings revealed that the role was primarily concerned with managerial and administrative tasks and lacked clear definition in schools. They have some involvement in leadership of learning tasks but lack of time prevents full engagement in these tasks. However, the majority of participants in the study reported being satisfied in their role. The conclusions from this research point to concerns about the time to take on fuller leadership roles in secondary schools due to conflict with other more mundane tasks. Recommendations at school level point to the need for a clearer definition of the role and possible restructuring of the role to leverage more time to lead learning in schools. Recommendations at a system level suggest advocating for a set of professional leadership standards for the deputy principal in the secondary school.