The next generation of school leaders: Are they being prepared for the role? 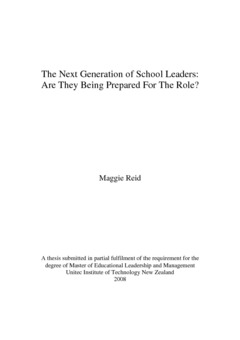 Reid, M. (2008). The next generation of school leaders: Are they being prepared for the role?. Unpublished thesis submitted in partial fulfillment of the degree of Master of Educational Leadership and Management, Unitec Institute of Technology, New Zealand.

This research set out to examine ways primary school principals identify, develop and support the next generation of school leaders. This research also involved examining first-time principal’s perceptions and experiences of coaching and leadership development. A qualitative methodology was employed for this research. Twelve primary school principals were interviewed using a semi structured interview format. Six of the principals had been in the role of principal for a minimum of four years. The remaining six principals were first-time principals who had been appointed to the role of principal within the eighteen months prior to the interview. The first-time principals were interviewed to determine their experiences of coaching and leadership development prior to being appointed to their current role. The findings of the research revealed that in growing the next generation of leaders a number of aspects need to be considered. These include identifying potential leaders and creating opportunities for leadership, providing support for developing leadership skills and demonstrating confidence in the potential or aspiring principal. All the principals considered coaching had benefits in an educational setting. The first-time principals all mentioned that you are never as prepared for the role as you think you are. To ensure that the next generation of primary school leaders are prepared for their future role consideration must be given to whether there should be mandatory training pre and post appointment. Further research into the preparation of the next generation of school leaders could incorporate the findings from the proposed external evaluation of the national pilot for Aspiring Principals and an examination into the impact of the Kiwi Leadership for Principals.