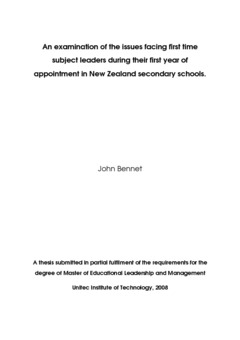 Bennet, J. (2008). An examination of the issues facing first time subject leaders during their first year of appointment in New Zealand secondary schools. Unpublished thesis submitted in partial fulfillment of the degree of Master of Educational Leadership and Management, Unitec Institute of Technology, New Zealand.