Design of change in cycle commuting 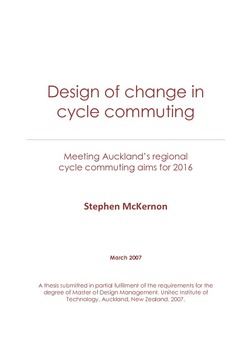 Cycle commuting is well-recognised but marginal in most English-speaking countries, following considerable popularity in the first half of the twentieth century. In recent decades, it has found favour among transport policy makers as a part solution to problems arising from the dominance of the motor car. As a mode of urban transport, the bicycle offers public health, economic, social, ecological, and quality-of-life advantages to both users and non-users. Auckland was one of the first New Zealand cities to have a cycle strategy, but has seen a slow decline in cycling since then. This thesis investigates the nature of cycle commuting as a social phenomenon, using the social systems theory of Niklas Luhmann to develop an analysis of its culture and social dynamics in New Zealand. It then deploys a range of systems design tools, including scenarios, causal loop diagrams, and system dynamics modeling, to develop an understanding of how to foster cycle commuting in Auckland. The final output is a set of recommendations towards doubling the proportion of cycle commuters by 2016.