Stop re-inventing the wheel: Management of learning resources in institutes of technology and polytechnics 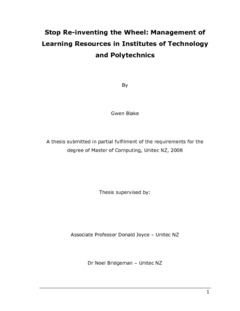 There did not appear to be any means of managing learning resources in the institution where the author works. There were a number of electronic areas where learning resources could be stored, but nothing existed that would manage them in terms of making it easy to retrieve them or being able to read about them. It was wondered if this was the case in other institutions and if so, did others think that a management system for these resources could be useful to New Zealand Polytechnics. An inductive course of research activities was undertaken following an interpretivist philosophy and stance. Four research questions were formulated from which four research objectives were established. Ten tutors from the computing departments of New Zealand Polytechnics participated in a survey consisting of 12 questions and 15 rating exercises. Four tutors from two institutions, but different departments (Computing, Business Administration, Foundation Studies and Hospitality) were interviewed. Their responses were analyzed and the results were interpreted to answer four basic research questions. The following results were gained: • There did appear to be a need for such a system • The purpose of such a system was postulated • Features of a system were identified • Suggestions were made on how the system could be used.