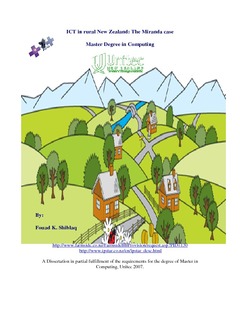 The research question for this masters project was what are the impacts of ICT provision in Miranda as an example of rural NZ? In order to answer this question firstly the ICT provision in Miranda needed to be assessed. Secondly, it was necessary to examine the issues or problems associated with connecting to the Internet in rural area. Thirdly, evaluation, assessment, and estimation of the potentials of providing broadband in this area were required. The final question was what is required to make broadband available in Miranda? The cost for upgrading telecommunications infrastructure is also required. This study looks at several aspects of urban-rural “digital divide” including broadband, applications and content. Many scholars argue that the term digital divide should include social and economic as well as technological aspects. This research looked at the ICT provision in rural New Zealand, concentrated on Miranda, and surrounding for this qualitative study. Eight randomly selected participants, who lived or worked in this area were interviewed. This study looked at the main four cultural factors affecting ICT provision in rural areas: technological, political, economic, and social. These four factors are also discussed with respect to the New Zealand government’s (including its agencies) contribution, in order to bridge the divide that exists between urban and rural. The research identified three main stakeholders: The New Zealand Government, ISPs, and residents in rural areas. The research has been organised into chapters describing the steps followed in this research project. An interpretative framework and the methodology undertaken in the analysis phase is also described and used to interpret results. What are the impacts of ICT provision in rural New Zealand? Firstly, technical, improvements to the telecommunications infrastructure in rural areas is required. Secondly, politically, the digital divide in rural areas needs to be integrated into the New Zealand fabric as a whole. Thirdly, economic, benefits, for instance in dairy manufacturing sector that forms more that 60% of New Zealand’s economy, are required. Rural ICT provision should give farmers added value to current farming practices. Fourthly, social, improvement in ICT for rural education, medical and other social services should improve the wellbeing of citizens in rural areas. This research is a single study design based on grounded theory within the Community Informatics research framework. This is characterised by factors that empower democracy, boost social capital, empower individuals, and restore a sense of economic development (O’Neil, 2001). In addition to these characteristics, this study’s results revealed that in fact this research increased and deepened the participants’ knowledge of ICT provision in this area. Gurstein (2006) concluded, “Research is not generally done simply for the research itself. It is usually done in relation to a specific outcome or action in the world of practice and what this means is that the research use is generally to be built into the research design itself ” (Gurstein, 2006, p. 20).