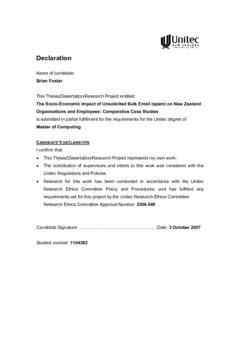 Unsolicited Bulk Email (UBE), or as it is more commonly known, spam, has in a few short years become arguably the most annoying, frustrating and even hated aspects of life on the Internet today, turning what was once considered the Internet’s “killer app” into a technical and security disaster of global proportions. Although significant international research has been done into studying the effects of UBE and ways of preventing it, very little is known about the impact it has within New Zealand. This research document details an exploratory investigation into how UBE is affecting organisations and their employees within New Zealand, by choosing two organisations from completely different industries in Auckland, New Zealand, and conducting in-depth comparative case studies into the economic cost of UBE to the organisations, and the effect it has on the employees who are receiving it. The primary goals were to calculate the economic cost of UBE to each organisation with their current anti-spam system(s), an estimated cost if no anti-spam system was in place, and to try and measure the attitudes and effective states of the employees who are receiving UBE. Key findings of the research indicate that for an organisation receiving high volumes of UBE, use of a properly configured and maintained anti-spam system (or layered systems) will provide a considerable economic saving over no system at all, but an incorrectly configured and maintained system can actually be no better or worse than having no anti-spam system at all, and high levels of UBE or false positives are resulting in customer orders being accidentally deleted. Just as importantly, the main effect UBE has on employees is to cause work-related stress in the form of anger and frustration, not only about the UBE received, but also the number of false positives the anti-spam systems are generating in attempts to prevent it.