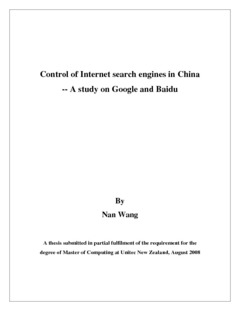 Wang, N. (2008). Control of Internet search engines in China -- A study on Google and Baidu. Unpublished thesis submitted in partial fulfillment of the degree of Master of Computing, Unitec Institute of Technology, New Zealand.

Internet is universal, open, information sharing media environment. The characteristics of Internet make it hard to be controlled. According to much literature, China has been believed to have setup its own Internet border to control the Internet. The Internet search engines provide global services to all users. When their services reach the Chinese Internet border, the Internet search engines have to apply Chinese Internet rules, regulations and laws. This research attempts to find out the real factors that influence control of Internet search engines in China, so it could help the readers and Internet search engines to build a picture of what and to what degree the Internet has been controlled in China. Methodologically, this research used real data that has been retrieved from real-life search engines. The sets of keywords which have been used were carefully selected based on a review of the literature. The data has been analyzed and findings have been compared with existing published literature. The final conclusions were not surprising. China is controlling its own Internet and it has been seen to be effective so far. The factors that influence control of Internet search engines were grouped and categorized into 3 different areas. They are political/religious factors which include news, blogs, BBS forums, opposition parties, political process in Taiwan, anti communist, independence movements, illegal religious movements; cultural/moral factors which include sex and homosexuality, health, violence; and economic factors. Among these factors, Chinese government has blocked most political/religious and cultural/moral factors related information and content.